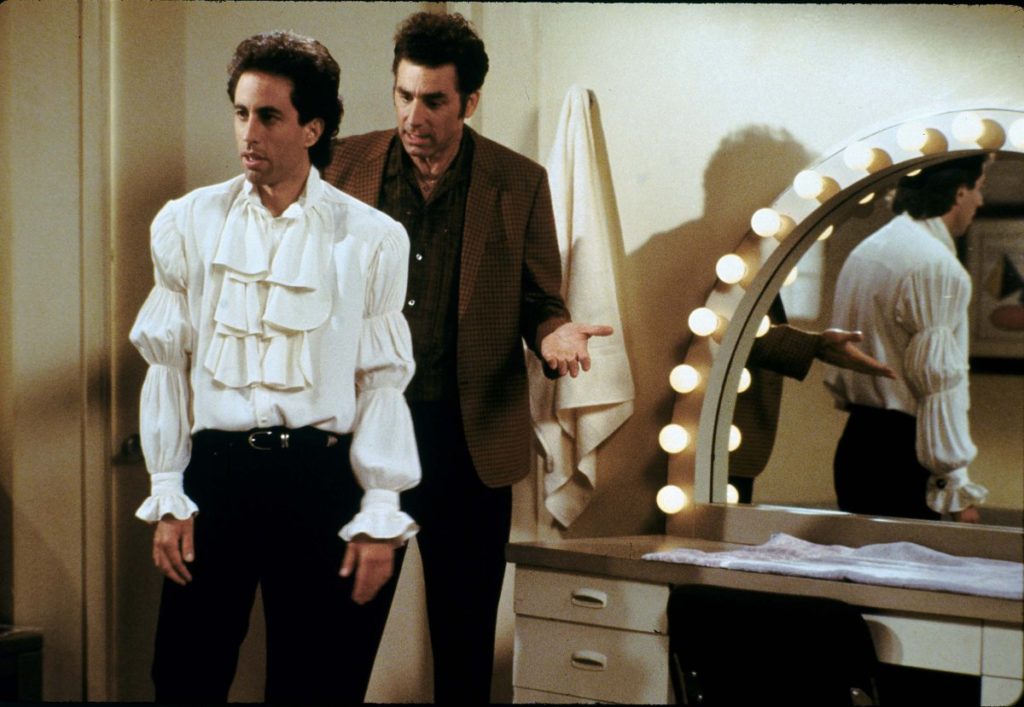 There are most likely three reactions one can have to reading the title of this piece. One, you recognize it as a Seinfeld reference. Two, you only just now recognized it as a reference upon me mentioning Seinfeld. Three, you have no idea what a puffy shirt is. If you fall under option three, you most likely often feel left out of conversations among coworkers and friends. Someone mentions a Soup Nazi and you think you missed a History Channel documentary.

Nobody likes to feel left out, but cultural references create this situation all the time. My last two blog posts dealt with Lost, and for many they simply glazed over and hoped for a return to blogs about Christmas and Radio Shack. Talk of polar bears and Hugo was meaningless to them. I run into this often when teaching. I try to come up with a common reference my students can all relate to in order to make a larger point. In recent years hit films such as The Dark Knight have been safe cultural touchstones, but even they can vary wildly between 30-70% of a class having seen them.

As many schools have turned more toward writing instruction in English courses and away from reading comprehension, finding a common novel, short story, or poem they all share experience with is nigh impossible. Even standards like Romeo and Juliet, Hamlet, The Lady and the Tiger, and The Road Less Traveled you’re lucky to find a classroom where half have read any of them. I noticed this past semester that while several students in a class had read John Steinbeck’s Of Mice and Men, very few of them had any context for its setting and time period.

Meanwhile, in music we’ve abandoned the idea almost entirely of a shared populist music catalog. Students very rarely listen to radio, preferring instead to indulge in their iPods. This probably explains why you find few commercial rock stations on the dial anymore. MTV has abandoned any music playing, and the closest we come to a zeitgeist of music are American Idol and Glee (both of which revel in having their participants sings songs from forty years ago).

The point to all of this being that we are losing our shared cultural heritage. As we begin a century predicated on the notion of everything is customizable to our personal desires, we lose sight of the idea that being forced to experience some things as a collective mass is part of what creates our sense of community. If I can no longer expect an audience to recognize the significance of Jacob and Esau’s births (cough, Lost, cough), then do those stories lose a great deal of their value? Do we lose a little bit of what we call civilization?

At a recent academic conference I sat on a panel concerning comic strips and comic books. One of the issues raised was that young people today have trouble reading comics and following the words and pictures together as a story. One audience member asked why, and my answer was that my generation and older can remember buying their first comic book. Whether you were male or female, nerd or jock, at some point you probably picked up a comic book, whether it be Spider-Man or Archie. We also grew up, for the most part, with parents who sat at a kitchen table and read the newspaper each morning before heading off to work. Our first exposure to reading the paper most likely came from Garfield or Ziggy comics, and from there we branched out into sports scores, features, and perhaps a cursory glance to the front page news. When I speak to students today, few can name a comic they’ve ever read (you can imagine this is particularly disturbing to me).

That might seem overly dramatic, but consider it the next time you mention a favorite film or novel to a group of people and receive blank stares in response. In a world of unlimited options, have we abandoned the one to share?

Secrets of your final exams

Lost was never an intellectual show

Why Lost can do nothing but disappoint