You are at:Home»Movies»Features»The not so pure history of film 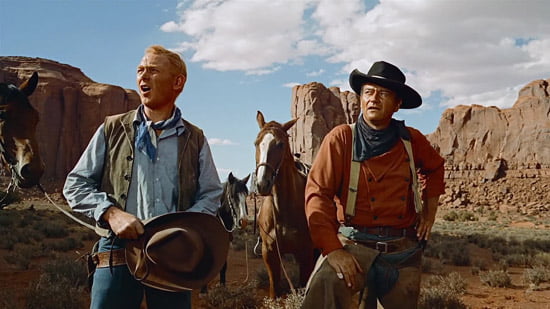 John Wayne in The Searchers

For the last few weeks I’ve been working on prepping the Introduction to Film course I’ll teach in the fall. The class has a lab during which we have enough time to screen full length films. That means I have to pick which films to show, and that can be harder than it sounds.

When dealing with a young audience, anything made before they were born often comes off as odd and unapproachable. The dialogue seems funny, the special effects dated, etc. For this fall’s class, that means anything prior to 1990. Obviously I can’t limit myself to just films made in the last 20 years, but going beyond those years means not only addressing the previously listed concerns, but also one of morality. You see, many people can’t quite wrap their heads around the idea that the world was a place of questionable morality before they were born. It’s as if we all think original sin began with us.

This has long been the case with teaching literature. When The Canterbury Tales or Shakespeare mock religion, discuss sex, or even stoop to fart jokes students are bewildered. The references either go over their heads, or they attempt to rationalize them away. “Oh, that’s just the teacher thinking of it dirty. That’s not how they mean it.”

With films students are even more conflicted. How could a film from the 1950s be about affairs, rape, and racism (like John Ford’s The Searchers) when the television shows of the time were so immaculately scrubbed clean? Married couples slept in separate beds for crying out loud!

I’ve often felt a contradicting challenge when trying to lecture on the positive message of some films. John Landis’ The Blues Brothers has always clearly had a positive message about religion, even if it took the Vatican until just this year to acknowledge it. The television show The X-Files is even more heavy-handed in its positive religious message, especially with the Catholic undertones. I wonder how long until the church acknowledges it?

As a media creator, I know often my films, comics, cartoons, etc. have been misinterpreted. People take something too much at face-value, or perhaps not enough. It’s frustrating, and at times leads to discussions of, “Well, maybe we should spell it out more clearly!” However, in approaching the history of literature and film from an academic perspective, I see the futility in doing so. Even when it’s crystal clear, it can still be cloudy with a chance of meatballs.