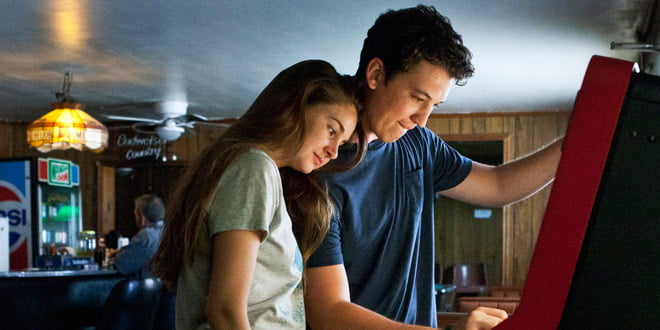 “It’s really human of you to listen to all my bullshit,” is maybe Molly Ringwald’s best line from the teen classic Sixteen Candles. It speaks to the hours we all spend as teenagers complaining, droning narcissistically about ourselves, and waxing poetically. It’s also disarmingly innocent and earnest at the same time—which also happens to be the perfect description of The Spectacular Now.

Sutter (Miles Teller) and Aimee (Shailene Woodley) are opposites of the high school social scene attracted to one another when Sutter wakes up from a hangover in her front yard. That meeting could appear in a lot of teen movies, but what follows is what distinguishes The Spectacular Now. Both characters feature almost boundless energy on screen. A simple conversation electrifies them both—he trying to play cool and she nervously trying even harder. It’s the awkwardness that anyone as an adult who has been around teens will instantly recognize. They’re not simply desperately unsure how to act around one another, but alone as well.

Eventually there’s a prom and talk of staying together as high school ends and real life begins. This is again all fairly common territory for this genre. What again separates this is that neither event is treated in a rote manner. Prom is not magical, but almost melancholy. Going away to college isn’t just a threat to their blossoming relationship, but to their identities both together and apart. A sex scene is played both for the awkwardness of real teen sex, but also the intense intimacy. It might make parents of teens squirm, but not for the reasons most sex scenes make audiences and actors uncomfortable.

Sutter is the focus of much of the film, but it’s Aimee where the film finds its heart. A scene late in the film takes us on a family reunion road trip for Sutter, but while he (mostly) holds things together as a stoic tabula rasa, Aimee conveys so much of the heart of the film in those scenes with just her face. She’s fragile and we want to protect her, but she isn’t deserving of our pity. Aimee is too good to deserve our pity, which the audience starts to realize about the same time Sutter does.

Is this now one of the great teen films? It certainly belongs on a short list from the past decade. By the final scene I hated to see it and my relationship with these two characters come to an end. In that way, it reminded me a lot of my teenage years.