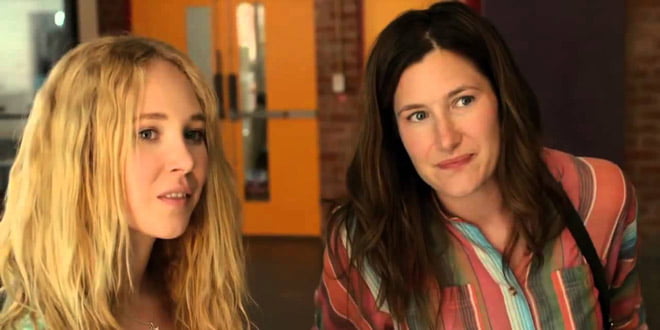 Afternoon Delight had its moments, excuse me, of delight. Unfortunately, those moments were few and far between for me. In between I found a movie searching for a rudder, lost in a sea of possibilities.

Rachel (Kathryn Hahn) is married to Jeff (Josh Radnor), but despite one child and an upper-middle class lifestyle, she seems terribly unhappy. Rachel and Jeff aren’t having sex, her friends are too-pushy mothers, and her therapist (Jane Lynch) is encroaching on Rachel’s time with her own issues. She need something to spark her life and it comes in the form of McKenna (Juno Temple), a stripper she meets during a lap dance meant to invigorate her sex life. McKenna soon moves in with Rachel and becomes her pet project to “save.”

That’s the plot, but what’s the point? To be honest, I have the same question. There’s a lot of satire here about the well-to-do bored housewives and the cattiness that comes out through their children. There’s some tweaking of affluent, liberal guilt and the pressure it puts on people to fix people when it’s convenient. There’s some heterosexual boredom and sapphic temptation that teases, but never goes anywhere all that interesting. There’s basically a lot of stuff here, but none of it congeals into a plot we care about.

I like the actors here. Hahn is criminally underused in Hollywood, and hopefully this role will mean more work. Radnor is solid both in front of and behind the camera in films such as Liberal Arts. Juno Temple manages to balance the vulnerability we want to see with the streetwise we know is there. She’s not a hooker with a heart of gold—she’s just who she is. But character studies like this have to feel earned. Afternoon Delight never feels like it knows which film it wants to be. By the time we get to the ending, it feels unearned and purely crowd-pleasing. Was smoking pot and lighting a candle all Rachel needed to fill whole again?

There’s part of me that feels maybe I’m just not the intended audience here. I suspect that women who occupy the same world these characters inhabit may find referential truths that make the entire film resonate. I feel like I’ve seen better looks at this character recently. Melanie Lynsky in Hello I Must Be Going comes to mind. Rent that instead.