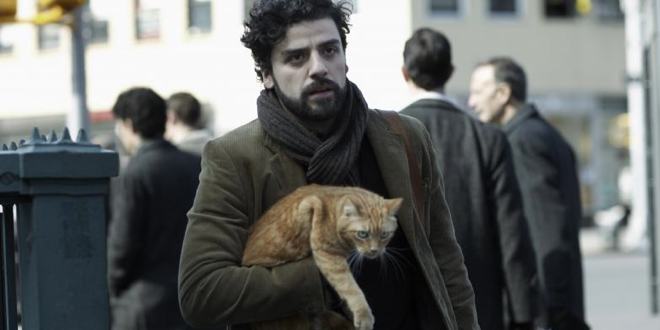 Have you ever watched a bully repeatedly pick on the same kid? Or maybe stood by while someone went overboard scolding a bad dog and began to beat it? If you enjoyed either of these activities, then you might also enjoy Inside Llewyn Davis.

That initial description may come off harsh, but this journey of a folk singer first engaged me before eventually leaving me cold and angry at it. The titular Llewyn is played by Oscar Isaac, and he’s quite good in the role. In fact, Carey Mulligan is fantastic and even Justin Timberlake turns in one of his reliable, although working-at-it, performances. It’s 1961 and Llewyn sees his chance at making it as a folksinger fading. Music is changing, and he’s simply being squeezed out between sleeping around on couches and performing on a rotating schedule at this dive club or another.

This part of the film works. It actually works remarkably well. There’s comedy and pathos aplenty, and even when it pushes a little too hard (Carey Mulligan’s angry rants are pushing a joke a bit too far by the third or fourth time), Isaac is there to ground us in his journey and make us care. Then, the film begins its real journey. Llewyn joins up with Johnny Five (Garrett Hedlund) and Roland Turner (John Goodman) on a cross-country road trip to Chicago. There, Lelwyn believes he will find whatever has been missing. We quickly discover it’s also where we’ll abandon the endearing part of the film. The road trip drags, perhaps symbolically, as so does Llewyn’s life. Goodman is comical, but a bully whose nadir keeps lowering itself. Why do we care about these two characters? We don’t, but I suppose much like Llewyn we must suffer along. When we finally reach Chicago we’re greeted with an anti-climax and right back to New York.

In between we get some good folk music, but nothing that will blow away fans of the genre already or likely to entice new fans in the way O Brother, Where Art Thou? did with bluegrass. There’s a weird usage of cats, again, I assume as some symbolism of Llewyn’s bumbling life. Except it seems a cheat to include the animal solely as a symbol of his dream left behind to eventually die at his own hands.

The Coen brothers have made some great films. This one feels too nihilistic for my tastes. It’s too much black humor in the celebration of one man’s failure in life. I get the desire to say most artists end in the gutter and not like Dylan on the stage (and that talent is hardly the determining factor), but here there doesn’t seem to be sadness for the life gone wrong. Dylan’s poem “Last Thoughts on Woody Guthrie” ends with the lines, “You’ll find God in the church of your choice / You’ll find Woody Guthrie in Brooklyn State Hospital / And though it’s only my opinion / I may be right or wrong / You’ll find them both / In the Grand Canyon / At sundown.” If only Llewyn left us with the same hope.