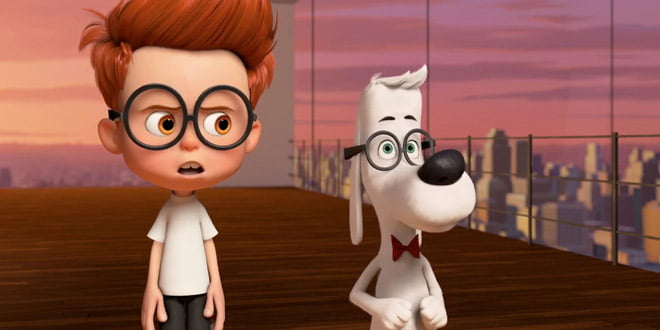 How does Moses make his tea? Hebrews it. While not a joke from this film, that is certainly representative of the style of humorous puns. Of course, if you were already a fan of the 1960s cartoon then you knew this. How strongly you hold that allegiance to the original cartoon will determine your enjoyment of this update.

The titular Mr. Peabody is an anthropomorphic dog that speaks like a Harvard lecturer (he tells us he indeed did graduate form Harvard). One day he finds a boy (Sherman) and decides to adopt him. This sets up the central conflict of the story—a child welfare worker that wants to remove Sherman from Peabody’s custody claiming dogs don’t make good parents. That’s cute, but in a day and age where parental and marriage rights are daily headlines, it might prove too in your face for some. Good for DreamWorks for not being too tepid to make a point.

Peabody is voiced by Ty Burrell of Modern Family fame, but the rest of the cast might be hard to spot. They’re mostly an assembly of voice actors and unlikely to trigger that, “Oh yeah, that guy,” feeling you get from a lot of animated films. This is a good thing. Animated films of the early 2000s were prone to stunt casting. Cast a big star, regardless of whether they fit the voice, so you can advertise it to their fans. Animation lovers are not out of the woods yet, but this is certainly a step in the right direction.

Beyond the voices we have a cute story about coming of age and accepting the differences that make us all unique. This is hardly groundbreaking material, but it’s executed well here. The final speech is heartwarming and makes us want to return to these characters (for the inevitable sequel if this one succeeds). What will really determine your enjoyment, however, is your appreciation for the central conceit of this film. That is, that the entire endeavor is a guise to spice up a history lesson for kids.

In that way the film both succeeds and fails where the original soared. It does indeed bake historical facts right into the plot, and there are plenty of funny one-liners and puns that will both connect with kids and soar right over their heads to their parents. But the wit here is less biting than in the original. It’s been softened to make it more kid friendly and, one assumes, acceptable to international markets it might be poking at. The action, which the original certainly wasn’t known for, has been theme-parked-up. A few minutes of history is routinely punctuated with a roller-coaster moment of running.

Does this hurt the quality of the concept? Well, it’s certainly not as cerebral as the original cartoons. Still, if you can look past what the original was to what the new version actually is—you’ll find a lovely family film that both teaches history and love of who you are. It may not be worthy of Mr. Peabody’s degrees, but it certainly is worth your family’s time.