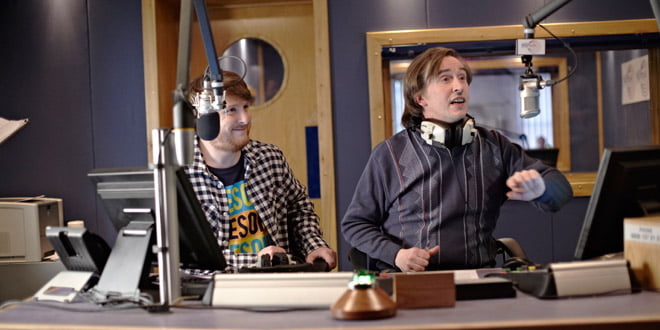 The British have the ability to self-correct during the middle of a comedy in a way that feels perfectly natural. The joke is headed one way, and the comedian realizes the utter silliness of it all and self-corrects to an even more absurd destination. That’s the genius of Steve Coogan in his most famous role of Alan Partridge.

Here the character well known to British audiences finally gets a proper U.S. showing in a feature length film. Some of the awkwardness of the character has been toned back here, but he’s still cut in the same mold as Ricky Gervais’ boss character on The Office. Alan doesn’t know he’s a jerk half the time, and the other half he simply doesn’t care.

Played by the talented Coogan the character shines here. While at times it almost feels like one of those reunion tours bands sometimes muster up to pay the bills, Coogan can still play the notes. The comedy is fast and furious, and other than some late moments that try to actually make the plot matter, the film rarely drags.

Unfortunately, it does drag. I value the need for a plot as much as anyone, but sometimes I feel the lack on conviction in comedy films. The jokes are what matter. Plot development is simply there to get us to the next joke, or at least in such silly films as this. If they were going for something more cerebral like a Coen brothers film, well, they missed that.

But a strict deconstruction of a comedy film defies its intent. The point here is to tickle you, and the question you have is does it succeed, or more pointedly, will it succeed for you? If you’re looking for Monty Python, this is not it. If you’re looking for something feel-good and British like The Best Exotic Marigold Hotel, this is also not it. However if you’re a fan of the awkward British sitcoms that have so inspired American comedy over the last decade, or maybe even an import fan of the Partridge character, then this just may be your ticket. I laughed. A lot.