The Importance of Being Mario: Super Mario Bros. 30th Anniversary 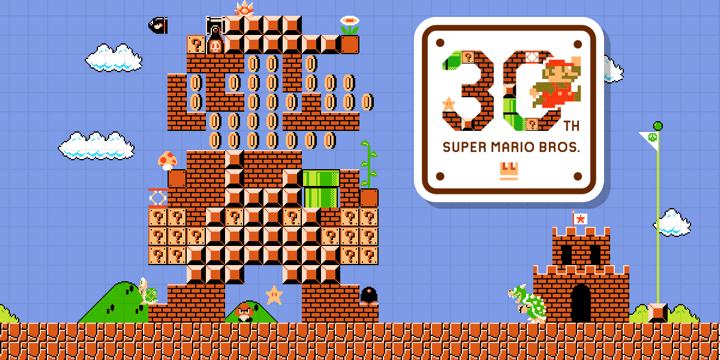 On September 13, 1985, Nintendo forever changed the media landscape. That was the day they introduced the world to Super Mario Bros. Video games and the broader media environment haven’t been the same since.

Of course, Super Mario Bros. wasn’t the first game to feature Mario. He first appeared four years earlier in Donkey Kong on July 1, 1981. Although originally nicknamed Jumpman, he was rechristened Mario during the localization from Japan when, reportedly, Nintendo of America couldn’t pay their bills to a warehouse landlord of the same name. A year later Mario returned for Donkey Kong, Jr., in which players had to rescue the now imprisoned Donkey Kong. This is the first and last time Mario has played the villain in a title. The following year Mario returned to his heroic roots and received his own spinoff, costarring with his brother Luigi in the arcade title, Mario Bros.

But it was the 1985 title, Super Mario Bros., which shot the mustached plumber to super-stardom on the Nintendo Entertainment System (NES). It’s not accurate to say that Mario came with every NES (it was possible to get the NES with no games or simply with Duck Hunt and Gyromite), but Super Mario Bros. quickly became the default pack-in title for many when they purchased the system. From there it became the epitome of a “system seller” or “killer app.” Many flocked to purchase an NES simply to play Mario—the hundreds of additional titles available were simply frosting on the cake. Many consoles still use this mindset at launch today. The original Microsoft Xbox might have died a quick death had it not been for the fever behind its launch title, Halo: Combat Evolved. Five years after that Nintendo turned around their finances by packing in Wii Sports with every new Wii console. Many purchased the console exclusively for that title and never bothered with buying another game.

Super Mario Bros. was revolutionary for many reasons. Its scrolling game world seems simple today, but at the time it was fairly uncommon in arcades and consoles. Many moved screen-to-screen in a grid-like pattern. On the PC side-scrolling was darn near impossible to replicate. In fact, one of the earliest successful ports of a Mario game to PC was done by game developers John Carmack and John Romero as a sort of proof of concept (i.e. evidence that they were technically capable of coding such a game). They used that experience to develop Commander Keen, one of the first and most notable smooth-scrolling platformers on the PC. It was what they accomplished a few years later, though, that changed the industry when they made seminal first-person-shooters Wolfenstein 3D, Doom, and Quake.

Graphics weren’t the only innovation, though. Designer Shigeru Miyamoto had hoped to be a manga (Japanese comics) artist before devoting his life to video games. When he developed the original Donkey Kong he wanted the game to have a story, which was fairly unconventional at the time. Pac-Man had no real “story” to speak of other than “eat dots.” Defender was simply “save the people.” Donkey Kong, however, began with the titular villain stealing away Mario’s girlfriend, Pauline, and him setting off on a mission to save her that climaxed with the fourth level. Donkey Kong told a complete narrative, taking us from the kidnapping to the rescue and reunion of Mario with Pauline.

By the time of Super Mario Bros. the narrative aspirations were even higher. Again, the trope of the damsel in distress is used as Princess Toadstool is kidnapped by the evil Bowser. Mario sets out through eight worlds with four levels each to rescue her. Levels progress from one to the next with brief intermissions showing you entering the underground levels such as 1-2, and the third level in each world ending with your arrival at a castle to rescue the princess in the following fourth level. For the first seven worlds, however, you discover that the princess is not in that particular castle, as Toad (her attaché, of sorts) informs you. Additional backstory, of course, is provided in the instruction manual for the game for those that bother to venture there.

Today, the Mario titles are noteworthy for their threadbare narratives. While Sonic the Hedgehog and other long-running series attempted to adapt with the times and add more complex stories (Sonic falls in love with a human girl in one game), Nintendo has stayed fairly true to the original plot of kidnapped victims that Mario must rescue. That doesn’t mean the effect from Mario’s trailblazing foray into narrative hasn’t been felt. Early followers such as Ninja Gaiden tried to thread more complex narratives into games, and modern franchises such as Uncharted, Metal Gear Solid, and Final Fantasy often feel more like digital novels than traditional video games.

Still, games rarely have such lasting impact if they don’t play well, and the Super Mario Bros. franchise is most lauded for its elevated gameplay. It isn’t just pinpoint controls that are the envy of similar platofrmers (play a round of Mario and then try dealing with the floaty physics of the Little Big Planet games), but also the ingenious level design. The first level of Super Mario Bros. is a tutorial wrapped in gameplay. As you progress rightward on the first screen you encounter the first Goomba enemy. Touch it and you die—thereby teaching the player they need to jump. It so happens that this jump normally aligns the player under the first question block that releases the first coin of the game. Now knowing the blocks have rewards, the immediate next question block surprises the player with the game’s first power-up, a mushroom. Having learned that you should avoid Goombas, you may attempt to avoid the mushroom (they look remarkably similar), but it’s designed to fall off the ledge, hit the pipe, and bounce back at you. For someone unskilled playing their first game, the likelihood is that on its bounce back it will hit them, making them grow into Super Mario, thereby teaching a core mechanic of the gameplay. That’s brilliant level and game design, and in the literary realm we might use the old adage “show, don’t tell” to describe it. Show the player how to play—don’t tell them.

Thirty years later, new generations are discovering the back catalog of Mario titles. My nephews play them on handheld devices in the backseat of the car. Their timeless nature led to the anniversary- minded release of Super Mario Maker, a new title that allows anyone to make their own Mario levels and share them with players around the world. This is to say nothing of the countless spinoff games (Mario Kart, Mario Party, Dr. Mario, etc.), merchandise such as toothbrushes and bed sheets, and even a Hollywood motion picture that have followed Mario’s debut. These details add to his stature as an icon, but it was the original Super Mario Bros. that set him on a course for reshaping—and in many ways defining—an entire medium.