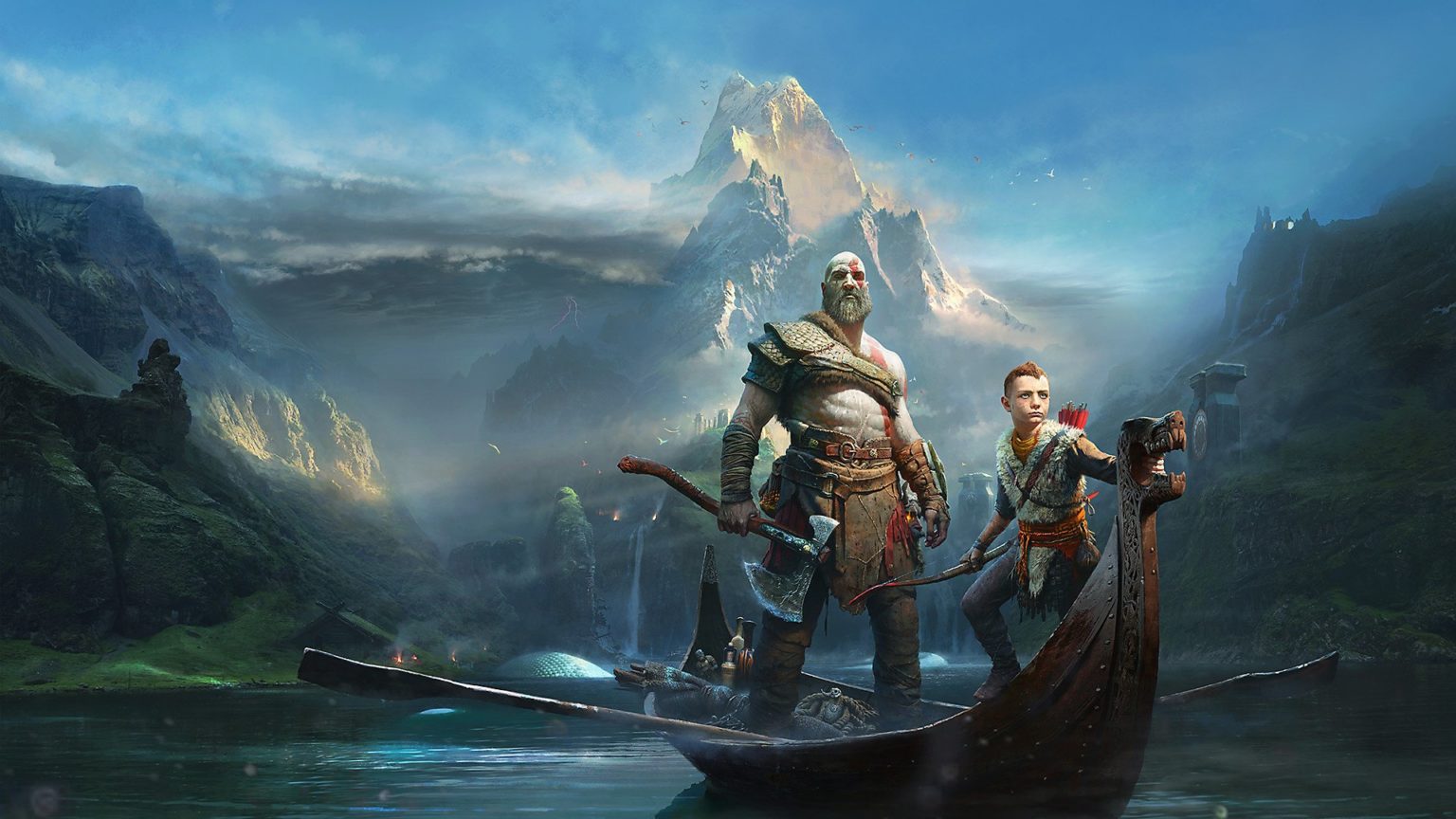 By JustinJanuary 7, 2019No Comments10 Mins Read

Every year I like to showcase some of my favorite games from the past year. 2018 has been a remarkable year for games in not just quality, but variety. My top ten are below, but real quick some honorable mention callouts for Dragon Ball FighterZ, Octopath Traveler, Dragon Quest XI: Echoes of an Elusive Age, Onrush, House Flipper, Pokémon: Let’s Go Pikachu!, The Messenger, Minit, and Two Point Hospital. That’s a whole lot of gaming to keep you busy.

10. Florence (Mobile)
Last year I was surprised by including visual novels in my top ten, and here I’m again surprised by a mobile game that heavily resembles a visual novel in style, if not gameplay. Florence is about the ecstasy of falling in love and all the troubles that follow. It showcases this through a charming soundtrack and whimsical graphic-novel style panels, but it’s the in-between that shines.

Florence features gameplay, but it’s how that gameplay evolves to fit the mood of the story. For example, as you fall in love, you’re completing puzzles to form word bubbles. Those puzzles become simpler as your love grows, and later grow more complicated as you fight. It sounds simple, but it carries real emotional weight into the gameplay, which is not something most games with one hundred times the budget can claim.

9. Super Smash Bros. Ultimate (Switch)
I loved the original Super Smash Bros. on the N64, but I’ve progressively liked the games less and less with each new iteration. After Melee they always felt like they got too busy, becoming less of actual skilled games and more pure chaos. I still bought them, however, because they made fun party games (where chaos doesn’t really matter). Something changed here.

I think the World of Light single player game forced me to really focus and expand my play style. I think I learned to play modern Smash, and it made me love it again. That single player game? Plan to invest dozens of hours into it, and that’s before you even deal with the plethora of other modes that make this one of the meatiest games of the year. The callbacks and allusions to classic gaming, Nintendo or not, make this feel like something more than that modest N64 game that started it all. Super Smash Bros. more and more feels like a love letter to gaming and its insanely deep history. I suppose I finally couldn’t resist.

8. God of War (PS4)
After 2013’s God of War: Ascension, I was pretty much done with the series. While I very much enjoyed the original trilogy, it was all starting to feel quite tired. How many more levels could I button mash my way through while watching Kratos rip some poor Greek god’s arms? If there’s any fair comparison, I’d say it’s the Fast and the Furious films. While Fast Five (also the fifth entry in its franchise) breathed new life back into the films, they are certainly starting to show their age.

That’s why this new God of War surprised me so much. Sure, they revamped the combat and moved it from Greek to Norse mythology, but those are tangential reasons for my feelings changing. Instead, this new entry did something I never thought it could—it made me care about Kratos. He’s always been a fun action movie hero type, but here he feels, well, almost like a real person. The story wrapped around him feels grounded, while still fitting in the spectacular set pieces the series is known for.

7. Celeste (Switch, XBO, PS4, PC)
There’s a Super Meat Boy quality to the pinpoint platforming that Celeste asks of you, but unlike that title, I never got burned out here. I kept pushing forward not because of anything to do with the difficulty, but because the story that started out so simply grew until it engulfed me.

I am going to give fair warning here that I’m about to divulge into spoilers. If you don’t want to know anything about the eventual turns this game takes, now is the time to back out. Still here? Good, well I like that this difficult platformer uses that difficultly as its metaphor to talk about mental illness. It reminds me a lot of how Hellblade: Senua’s Sacrifice did something similar last year. Imagine if halfway into Super Mario Bros. you discovered that Mario is deeply depressed, and the mushrooms are simply a stand-in? That’s slightly reductive, however, as the game is more than that, and its clever remixes of songs for B-side levels will definitely keep you glued even if the story loses you.

6. Hitman 2 (XBO, PS4, PC)
I have tried multiple Hitman games over the years, but never really gotten into them. Sometimes I would enjoy a level or so, but the controls just always felt off. Then they rethought the franchise and suddenly it clicked. The open-world was a sandbox for mayhem. The clocklike world was at its best when you were interrupting it in hilarious ways. Even though it was just the latest entry in a long franchise, it felt remarkably fresh.

So, when it looked like Square Enix might be shutting down the studio and killing the franchise I was certainly disheartened. Things worked out, though, and here we are with a new Hitman that feels like the perfect evolution of the franchise. No, it’s not a giant leap forward, but the small gameplay tweaks and remastered first game levels make this one of the best values in gaming for 2018. It’s a real shame that so many still seemed scared to give these games a chance. Hitman is one of the brightest spots in the industry today.

5. Dead Cells (Switch, XBO, PS4, PC)
A few years ago, I really got into Rogue Legacy. It felt like the perfect sense of progression mixed with tight gameplay and graphics. While it’s not fair to make a direct comparison as they’re two very different games in many ways, Dead Cells feels like an evolution of that title. While the art goes in a different direction, the gameplay feels even tighter.

The thing about a Rogue-like is yeah, the progression matters. You have to always feel like you’re making progress toward the end goal, but you also have to enjoy the journey. I feel like that’s where so many go astray. They’re simply not that much fun to play through their more girndy moments. Not Dead Cells. I’d be happy if more traditional platformers borrowed heavily from its controls. It’s probably the purest distillation of that style I’ve ever seen.

4. Donut County (Switch, XBO, PS4, PC, Mobile)
It’s hard to discuss Donut County without bringing up Katamari Damacy. While not derivative, Donut County definitely wears its inspiration on its sleeve. Instead of building up a giant ball from environmental objects, you instead create a blank canvas by sucking everything down through an ever-widening hole. It’s super simple gameplay, but so very relaxing especially on a tablet.

Still, what makes Donut County super memorable is everything surrounding the core gameplay loop. The music is fantastic. It’s actually listenable to on its own and I’ve had it on in the background while typing this. The characters are charming. BK the raccoon might remind you a bit of Bender from Futurama in his incorrigibleness but make no mistake—he’s his own character with an arc that proves touching. Even the glossary of items you discover is worth taking the time to read through as it provides some genuine laughs.

3. Return of the Obra Dinn (PC)
When I was in middle school, I had a teacher that once a week made us do logic puzzles. You know the type—Bill is twice as old as Suzie, who doesn’t like bears. You then fill out a grid to figure out whose birthday is whose. Obra Dinn is one of those logic puzzles on crack.

You play as an insurance adjuster investigating a ship where things went horribly wrong. As you progress in figuring out what happened to everyone, the mystery twists and deepens. So yeah, it’s a logic puzzle brought to life, but it’s also a murder mystery presented in its most basic format unlike any game I’ve experience before. That’s the real key here—Obra Dinn is unlike any other game not just on this list, but ever. It takes risks in design that even when it stumbles, you still have to admire its gumption.

2. Tetris Effect (PS4)
You know how they reboot every movie now within ten years? Tetris Effect is the equivalent of rebooting a video game. Take the classic gameplay that everyone is familiar with but slap a new coat of paint on top to make it hip for today’s kids! At least, that’s the cynical response. A fairer response is that remarkably, somebody made Tetris feel fresh and urgent again.

Remember the first time you played Tetris? You couldn’t stop, right? You had to try one more round to beat you last high score. Tetris Effect creates that same sensation by sprinkling a little bit of Lumines over this classic puzzle game. Each level has a different skin and music layered over it. As you progress the game forces you to learn the intricacies of Tetris in ways you might now have even been aware if you stopped playing with the classic Game Boy version. Tetris Effect is an experience everyone should have.

1. Marvel’s Spider-Man (PS4)
The drag on Spider-Man games over the years is that none have recaptured the feel of Spider-Man 2’s swinging through the city. You know something is decidedly right when you first fire this game up and the swinging feels not only as good, but better than that classic title. I was reminded of the sensation I had playing the original Crackdown. Simply traversing the open world was half the fun of the game!

Luckily, the rest of this title feels much more modern than Crackdown. Yeah, it basically boils down to a checklist of side missions like a lot of open world titles, but here that checklist is almost universally fun to do. I didn’t mind replaying some of the base missions trying to get a better score because the Arkham-style fighting felt tight and fun, but with the infusion of the better mobility offered by Spider-Man’s nimbleness. Most importantly, the story here is worthwhile. The characters are layered, and I grew to really care not just about Peter, but Mary Jane, Miles, and Otto Octavius, as well.