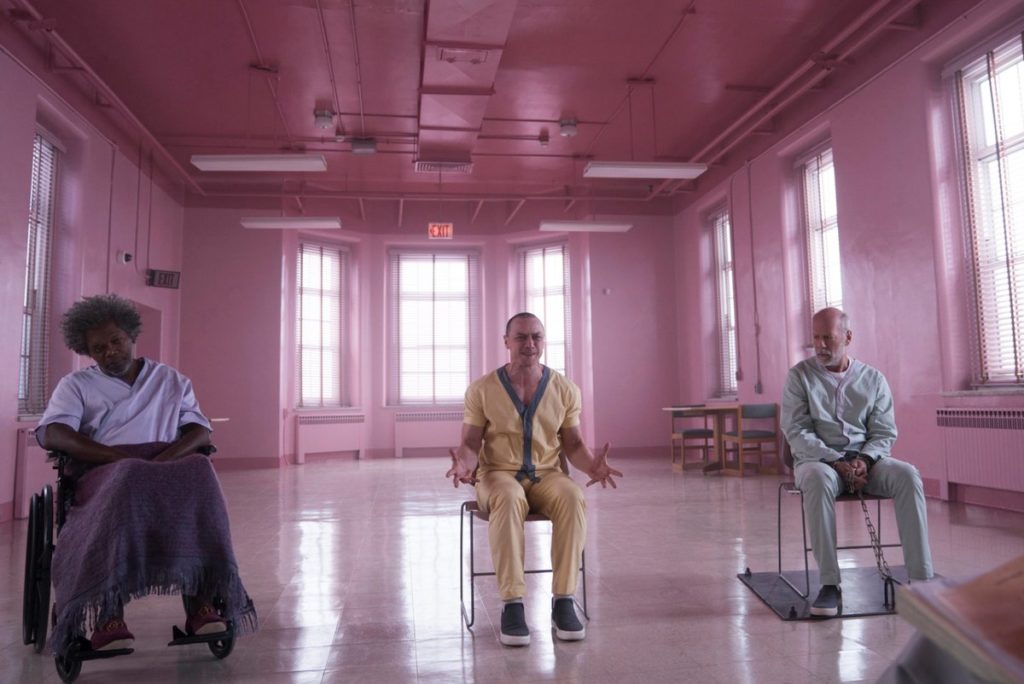 By JustinJanuary 28, 2019No Comments3 Mins Read

I have a confession to make—I like M. Night Shyamalan. As someone who purports to like film as art, I know that makes me an outsider. But I have to tell the truth. I think The Sixth Sense, Unbreakable, and Signs are legitimately great films. I think even his second-tier movies like The Village and Lady in the Water are fascinatingly flawed films. Even his disasters such as The Happening are more interesting to watch in their badness than many directors’ simply forgettable productions. Don’t get me wrong—Shyamalan has made some terrible films along with his great ones, but I find myself coming back interested even if I think he might fail.

Glass, his capper to the trilogy of films he began with Unbreakable and continued, surprisingly, in Split, is a good Shyamalan movie. It follows the three superpowered characters we’ve come to know in the form of Bruce Willis, James McAvoy, and Samuel L. Jackson now all locked up in an asylum together. Sarah Paulson is a psychiatrist attempting to treat them, and we get assorted characters from the past two films popping up throughout.

The thing to understand about the film is that it’s not what you think of as a superhero film. Anyone coming to it expecting Marvel-style theatrics is going to be seriously disappointed. This follows closely to the formula of Unbreakable in trying to ground the superhero mythology in our reality. The first two-thirds or so of the film succeeds in doing so as it’s mostly a character study with our featured stars mostly engaging in one-on-one scenes. While some of this mighty play out too slowly for some, it honestly moves at a breakneck pace compared to early Shyamalan films, including Unbreakable.

Instead, it’s the finale that has already proved most divisive to audiences. Some blame a twist, but honestly the biggest plot twist is one I feel is fairly heavily foreshadowed. While I won’t claim to have predicted the specifics of it, you could certainly see where it was headed. The meta-commentary from Mr. Glass feels straight out of Lady in the Water and the truncated showdown feels more grounded than any Marvel or DC finale under a light firing into the sky. It’s weird, because DC fans who claim to want a gritty, realistic comic universe should be eating this up.

Glass feels like the appropriate finale to the Unbreakable universe. It’s sad at times and heavy handed at others, but it’s always more interesting than it probably has any right to be. Look, I get that the mere mention of Shyamalan’s name turns some people off. But for those who are willing to go along with his wild rides, I feel he’s delivered one well worth taking.