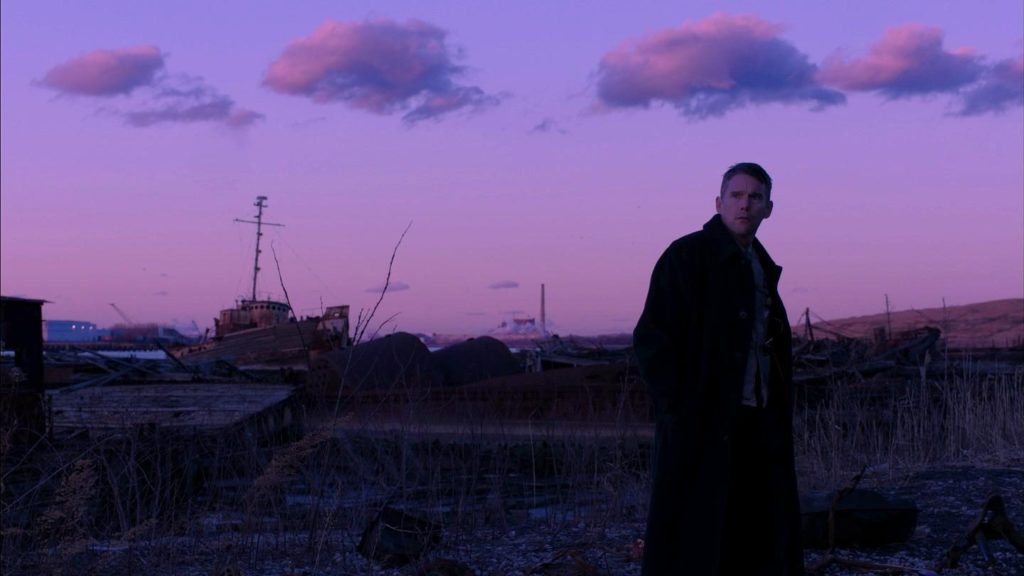 By JustinFebruary 9, 2019No Comments3 Mins Read

Making good films about religion is tough. Go too easy on the subject and you’re literally preaching to the choir with a film that tackles none of the complexities of faith. Go too rough on the subject and you risk alienating any potential audience either by offending their personal beliefs, or simply leaving them alone, lost in the wilderness. First Reformed leans toward the latter but will stumble for some in its final minutes. However, I found it gripping like few movies today.

Ethan Hawke stars as a minister of a small church in upstate New York that mostly serves as a tourist attraction these days as it approaches its 250th anniversary. A megachurch across town basically serves as its patron. Meanwhile, Hawke’s character, Father Toller, finds himself struggling to pray as he deals with the traumatic loss of his son in his past, dwindling church attendance, and a depressed, environmentalist member of his congregation. If that sounds like a lot, it’s important to note this is not a plot heavy film.

In fact, one of the things First Reformed gets so right is its willingness to linger not just on shots, but entire scenes. As Toller counsels the depressed man, the scene drags on long past when it would in most movies. For some that will lead to claims of the film being slow or boring, but writer/director Paul Schrader knows that the real meat of such a conversation comes as the facades start to break down. As the niceties peel back, we’re left with raw anger and doubt from both men. All of this is shepherded through the movie by Hawke’s narration via a journal he’s keeping.

This is one of the keen insights from Schrader as a director. I noted earlier the difficulty in tackling religion as a subject matter, but I think it breaks down even more simply—bad religious films are about outside acts, while good religious films are about inside struggles of faith. Note that recent standouts such as Noble, Calvary, and Philomena are much more concerned with the inner struggles of their characters than the plot-driven films we’re used to out of churches. Even when those films aren’t offensive like God’s Not Dead, they tend to be bland like the competently made but lacking in emotion I Can Only Imagine. First Reformed tackles that inner struggle.

I am purposefully ignoring too much discussion of the plot because there isn’t a lot, and what is there would be easily spoiled. The film culminates (and this could be spoilery, so turn away now if you so desire) in an ambiguous ending that will frustrate many that have stuck it out. This is likely also part of Schrader’s commentary on faith, but that’s for another article. What we do have here is a genuine attempt to look at what we believe and what it means to truly believe it. There’s a great line where Hawke’s character tells us, “How easily they talk about prayer, those who have never really prayed.” He might think it just as easy for those who have never really prayed to make a film on the subject.