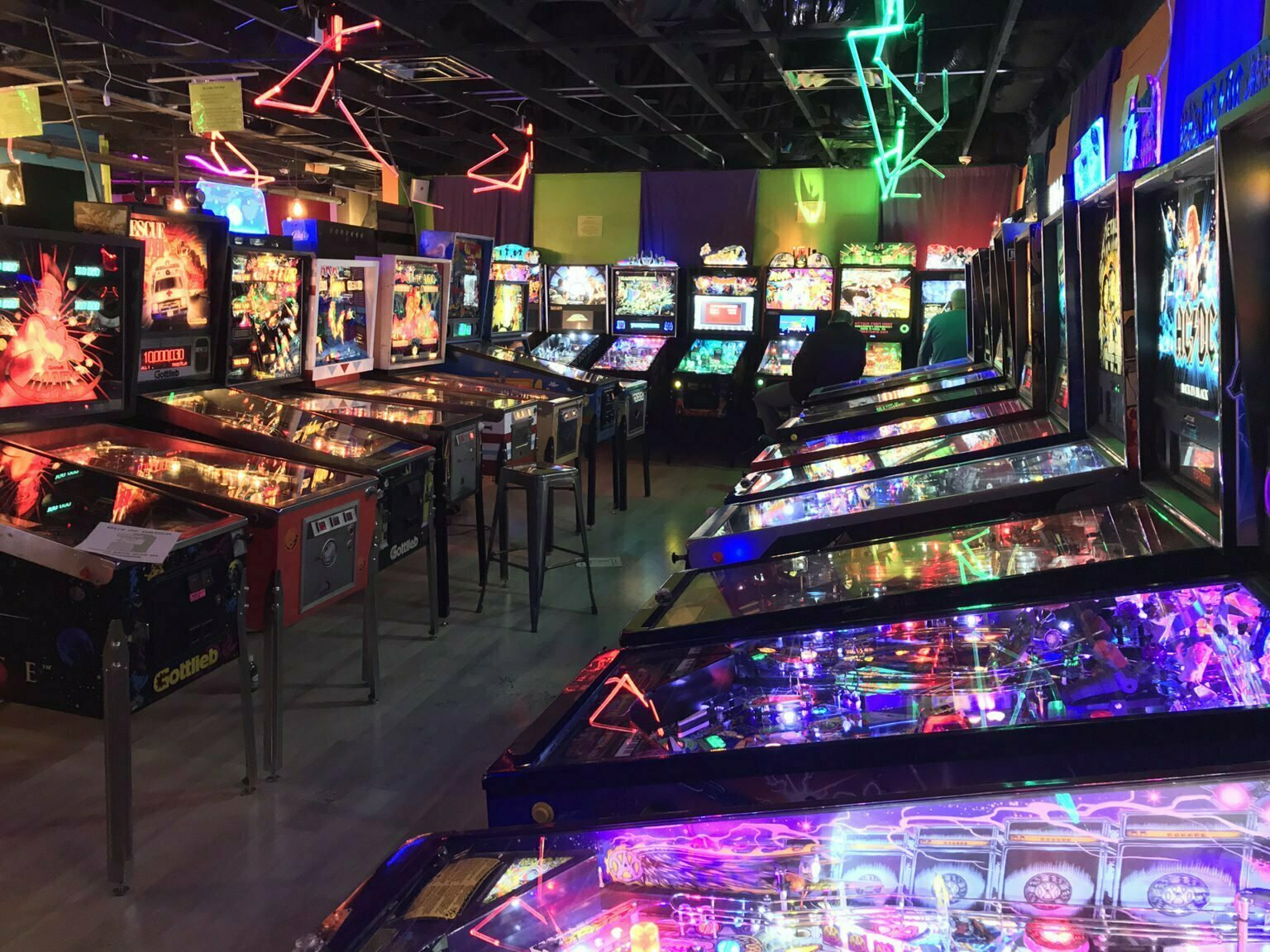 You might expect to find lots of things in Gatlinburg, Tennessee. Miniature golf? Sure. T-shirt shops? Definitely. Bears? On occasion. But a pinball museum?

That’s just what this east Tennessee town situated at the entrance to the Great Smoky Mountains National Park now features. The Gatlinburg Pinball Museum claims to feature over 100 pinball and arcade video games, and it certainly feels like that or more. For $15 for adults and $12 for children (10 and under), you get a wristband that allows free play on all the machines inside. That’s right—no quarters or tokens needed. It’s a similar offer to what places such as Chuck E. Cheese’s and Dave & Buster’s have moved to in recent years.

The difference here is that you’re getting some of the best games from the 60s through the 90s. From Medieval Madness pinball to the X-Men four-player arcade game, there’s something here for every taste. The building itself is a bit of a twisty maze as you wander from room to room. The glow of the arcade machines and some neon being your only light, as bumper smashing and 80s music fill the air.

What struck me most, however, is how much the Gatlinburg Pinball Museum serves as a history lesson and shining example for the need for game preservation. A few machines feature signs overhead explaining their significance, but much more could be done with this aspect.

So, with phone in hand, I decided to document some of their machines and explain why they’re worth your time. Sit back, relax, and enjoy a history lesson on fun.

The building itself, as noted, is a maze of interconnected rooms. I’m not sure what the building housed before, but it obviously has been adapted. Luckily, there is plenty of room to navigate around.

You may better know Tapper as Root Beer Tapper. The latter version was featured in Wreck-It Ralph. Note the unique beer tap handle on the cabinet–not something easily replicated through emulation.

The easiest way to distinguish the two versions is the original tapper featured a giant Budweiser logo thanks to its Anheuser-Busch sponsorship.

If you were guessing the best-selling pinball machine of all-time, one based on The Addams Family might not come first to mind. Yet, it is the best-selling the industry ever saw and this special Gold edition features gold accents and other flair to commemorate it. Bonus? It’s a really fun machine.

Next up were two iconic arcade classics. Galaga is a space shooter that helped shape the possibility of how you “lose” at a game. Players quickly learned that by intentionally allowing their ship to be captured by the enemy, they could then free it by shooting the enemy and get a double ship with twice the firepower. Later games with follow-up this idea of subverting what “losing” looks like in games.

Donkey Kong is important for many reasons. It’s the game that saved Nintendo’s arcade business. In introduced the world to Mario (originally named Jumpman). Perhaps most importantly to subsequent arcade games, however, it popularized the concept of cinematics (tiny animations) between levels that told a story giving its lead characters of Donkey Kong, Mario, and Pauline some actual personality.

The PlayChoice 10 cabinet was Nintendo’s way of getting NES games out into the arcade (we’ll see something similar later with SNK). Players could pick from ten different titles, with many classics represented here.

Of particular note is Mike Tyson’s Punch-Out!! being included. The game was later reissued as simply Punch-Out!!, dropping the Tyson branding after his rape conviction. Every release you see now, including on the Nintendo Switch, is of the latter Tyson-less version.

Vs. Duck Hunt is one of those weird anomalies that many aren’t aware. Nintendo actually ported many of their NES classics to arcades under the Vs. banner. There are a few minor changes, but the biggest one is a bonus round which finally allows you to shoot the snickering dog. Unfortunately, it instantly ends the round.

Mario Bros. is why its more well-known successor needed the Super moniker. It’s a pretty simple competitive game that you may be more familiar with being a bonus game in Super Mario Bros. 3 on the NES.

Not a lot to say about these tables historically, but they are three of the more interesting musically. The Who’s “Tommy’ is a rock opera featuring the titular character as a deaf, dumb and blind kid who becomes a “Pinball Wizard.” It’s probably still the most famous song about video games.

The AC/DC machine is simply a blast to play. When the music kicks in and the lights start flashing it’s like you’re at a concert. Truly something that can’t be replicated on a computer screen.

Dolly Parton’s machine is a testament to her crossover appeal as a country artist. She hails from nearby Sevierville, TN, and her namesake amusement park Dollywood lies between Sevierville and Gatlinburg in Pigeon Forge, TN.

The stereotype has often been that women aren’t interested in video games, but these three classics point to the opposite. The original Pac-Man was wildly popular with women, and when a hacked version dubbed Crazy Otto was bought out by Midway, they redeveloped the main character as female to go along with that popularity. Ms. Pac-Man ended up being one of the best-selling arcade games of all time.

Centipede, on the other hand, is notable for being co-developed by a woman, Dona Bailey. Her desire to make a visually striking game that catered more to her interests led to the garden theme with bright pastel colors, seen here on the cabinet. Also note the trackball controller, something not easily replicated even on PC hardware.

This arcade version of Tetris is made by Atari. That’s notable because the versions most people are more familiar with are Nintendo’s for the NES and Game Boy. Atari’s Tetris came out for the NES, as well. It was published under their label Tengen, but due to licensing issues they had to recall the game and so it’s relatively rare today.

Defender was the opposite of the three previously noted games and was overwhelmingly popular with men over women. It was one of the first games to feature horizontally scrolling levels. Its creator, Eugene Jarvis, would go on to create other classics such as Robotron 2084 and Smash TV.

Take particular note of the controls and the general complexity for a game that seems fairly simplistic today.

The Track & Field machine shown here is what’s known as a cocktail machine. Players could sit down at it with their drinks on top. They were popular in bars and restaurants and a pretty much forgotten design today.

Nothing particularly groundbreaking about these three pinball tables, but they do showcase some of the evolution between the two older machines of Line Drive and Joust, and the newer one based off The Hobbit films. The Hobbit table features a screen you can interact with through play.

When we talk about game preservation, one of the common responses is that almost anything can be emulated now. While emulation is fantastic for getting to experience games you might not otherwise ever get a chance to play, it doesn’t fully replicate the experience.

Missile Command uses a trackball to move your reticule and three separate buttons to fire from your three bases. Most home ports were to consoles which featured at most three buttons and couldn’t fully replicate this setup.

Tron’s joystick can somewhat be replicated with modern flight sticks, but its dial controller doesn’t exactly map to a mouse wheel, probably its closest match today.

Spy Hunter had you driving a futuristic car, so it didn’t exactly make sense to give you a standard steering wheel. Instead, you got what more resembled airplane controls.

Hercules was the last pinball machine made by Atari and is widely considered to be one of the biggest, if not the biggest pinball table ever. I put down my lip balm for scale at the bottom of the photo. It felt more like shooting a Skee-Ball than a pinball.

Sky-Line and Airport are notable as two of the older tables on display.

X-Men: Children of the Atom is notable for a few reasons. First, it was a CP System II or CPS-2 game. That refers to the board it ran off of, but more interesting is that these boards featured batteries to help prevent against piracy. Remove the battery and it would essentially erase the game. That didn’t stop piracy, but it meant you had to send the board back to Capcom to get the battery changed. Since they no longer offer that service, it has become a major pain for game preservationists.

The X-Men beat ’em up arcade game from the 90s is generally considered one fo the better titles of that genre and era that included other classics such as The Simpsons Arcade Game and Teenage Mutant Ninja Turtles. Four-player arcade games like this were first popularized by titles such as Gauntlet as a way to earn more quarters on one single machine. In other words, you could get four kids pumping in quarters instead of simply one or two.

Note that the X-Men game’s CRT monitor is starting to experience burn-in. This is particularly an issue for preservation as you can’t simply order a new CRT monitor on Amazon and newer flat screens introduce latency (delay) that was present in the original game.

Not a lot to say about these three pinball tables except that they’re all worth your time. Fore has one of the springiest shots of any pinball machine I’ve played. I have to assume that’s purposeful for the subject matter.

This Tron table lights up in exactly the way you want it to.

Medieval Madness is widely considered to be one of the best pinball tables ever.

Berzerk had to be part of the influence for The Bishop of Battle segment in the 1983 film Nightmares (Berzerk was released three years earlier in 1980). If you do not finish a screen fast enough, Evil Otto (a smiley face) comes onto the screen and chases you down. He cannot be destroyed.

The other two pictures showoff the Star Wars arcade machine that used vector graphics. Vector graphics used special monitors and can be difficult to appreciate in photos alone. Above is a video I shot (one handed as I tried to play) to showcase the unique look. Note how many of the graphics glow off the screen.

Donkey Kong Jr. is a great game, but it’s also remembered as the only Nintendo title to feature Mario as a villain. You play as Donkey Kong Jr. trying to rescue your dad from the original game, whom Mario has caught. Also of note, the Donkey Kong Jr featured here is the adult Donkey Kong of the later SNES Donkey Kong Country games.

Mortal Kombat is easily one of the two most famous fighting game series, right alongside Street Fighter. There is still so substitute to playing competitively with your opponent right beside you.

Speaking of competitive play, NBA Showtime was the followup to NBA Jam. Both games were known for their rubber band A.I. which allowed a player behind to catch up by sinking more of their shots late in the game. 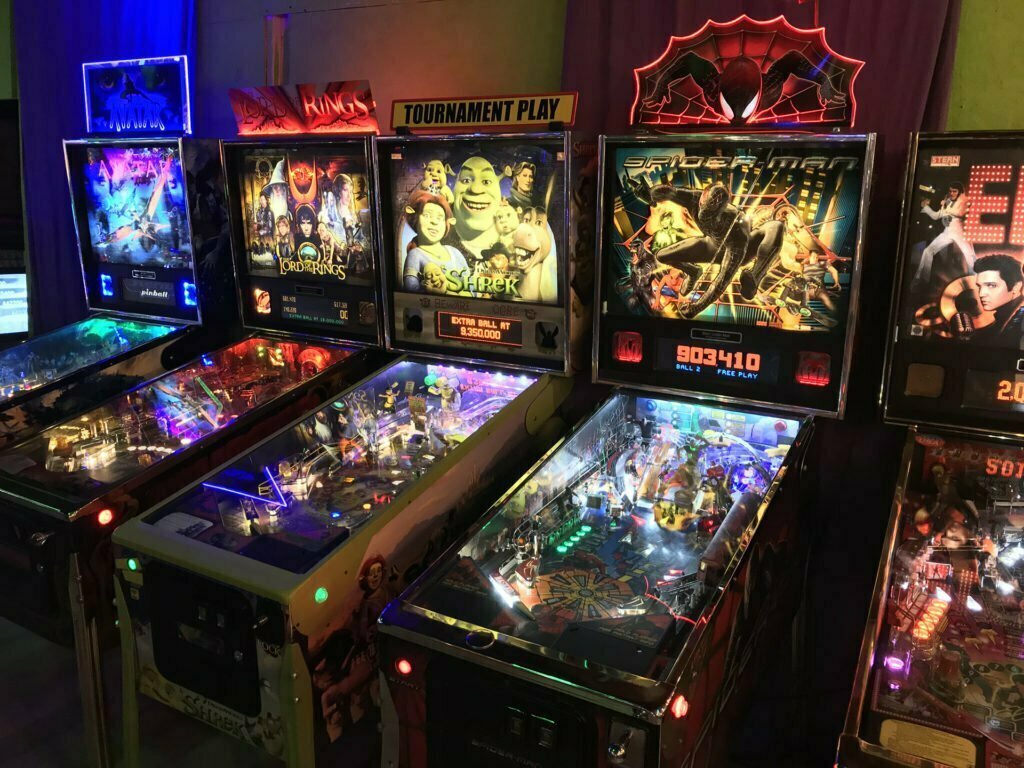 That’s all folks! I hope that was entertaining and enlightening. As far as things to do in Gatlinburg, I found the Gatlinburg Pinball Museum both a great value and lots of fun. I spent a solid three hours in there and probably could have spent more.

Over the centuries we’ve lost an untold number of literary works. Many early 20th century films were lost because no one thought to preserve them. The same is happening to video games today, and places like this are a wonderful resource to keep them alive in their original form for people to play.