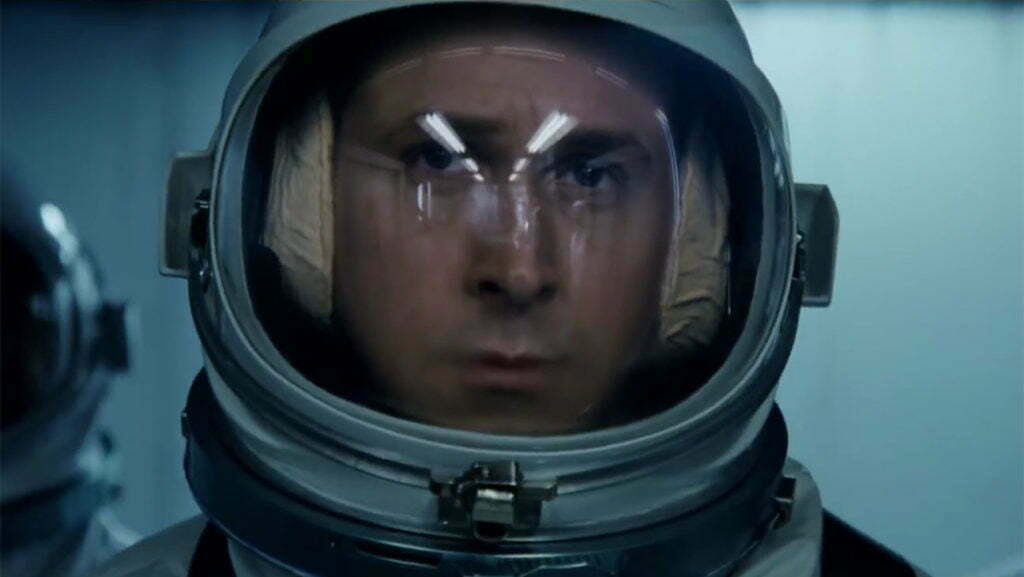 The difficulty with any space program film at this point is how do you make it feel worthwhile? Not that it’s any less interesting or important of a subject than say Spider-Man, but starting in elementary school we’re inundated with lessons, documentaries, dramatizations, etc. of one of our country’s greatest accomplishments. What’s there new to say about it? First Man finds something worth talking about in the emotional toll of getting there.

First Man stars Ryan Gosling as Neil Armstrong. Gosling brings his stoicism from his character in Drive to the role, so don’t expect too much fun and laughter. Whether or not that was truly how Armstrong behaved at home is up for debate. Very early in the film he loses his daughter to cancer and the film continues that tragic trajectory throughout. Space program films are usually flag waving affairs, but this one keeps things much more somber. It leans into the real danger those working in the program faced (and continued to). A tragedy late in the film perfectly encapsulates that danger while also putting the audience into the claustrophobic setting.

Throughout the film is an overriding sense of dread. You can see the tragedy of Armstrong’s daughter coming. You witness the strings of his marriage starting to unravel. If you know the space program history, you know that tragedy is coming. All of this NASA work is balanced with the astronauts’ home life. They have barbecues. They serve as welcome wagons. They cope with the less of friends and family. The special effects sequences in First Man are amazing and should not be undervalued (really, no film before has made you feel there quite so much), but what’s truly memorable is how it humanizes what were superheroes to many of us. These were the men that went to the moon, and they have no idea how to deal with saying goodbye to their kids.

Throughout, the cast of Gosling, Claire Foy, Jason Clarke, Kyle Chandler, Corey Stoll, and others give us a reason to care about these figures as real human beings. They’re neighbors and we feel they could be to us, as well. Foy is particularly impressive with her limited scenes. Late in the film there’s a scene as they prepare the press release for if Apollo 11 goes horribly wrong. First Man isn’t interested in demystifying the space program so much as it is in humanizing it—reminding us they might have been exceptional people who sent man to the moon, but they were still just people.