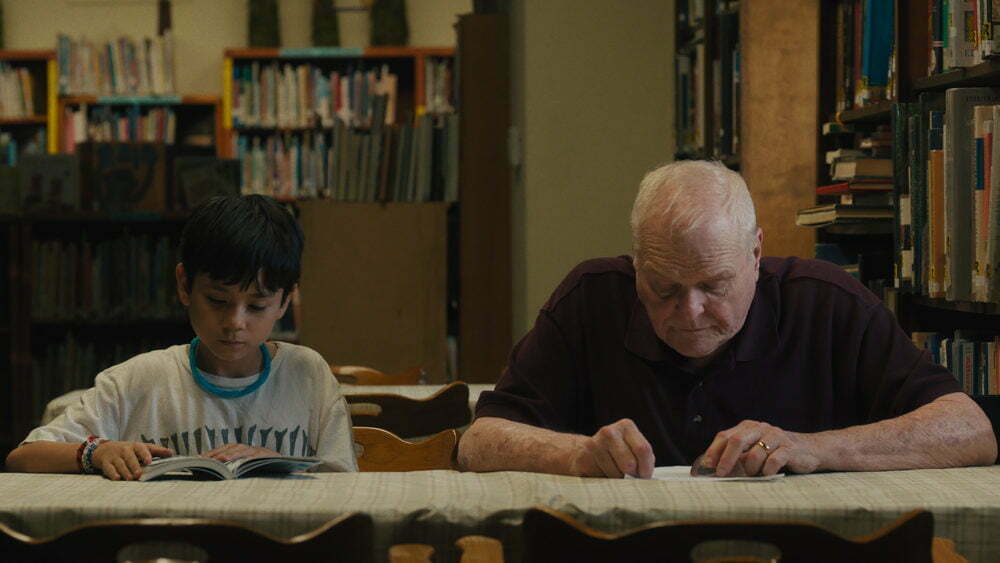 Director Andrew Ahn’s Driveways feels like the perfect film for our times. It’s a treatise on the basic decency of humans arriving when perhaps we’re most out of touch with our humanity physically and spiritually. If that sounds like high praise for such a small film, well, it’s well earned.

It tells the story of mom Kathy (Hong Chau) and son Cody (Lucas Jaye) as they arrive to clean out Kathy’s sister’s house after her death. Across the driveway is neighbor Del (Brian Dennehy), a widowed veteran who doesn’t speak much. My guess is you can already guess where this is headed, and yes, Del befriends Cody. Simple enough setup, but what sets Driveways apart is how it tells its story. Everyone present is thoroughly decent, even when they stumble.

Kathy sneaks out of the house one night to a local bar, but not before first leaving a note for Cody should he wake. She gets propositioned by a man she meets there, but she goes home instead to check on Cody. Kathy is a character beat down by the world and who at times wants to run away from her responsibilities, but she does the right thing. When Del discovers his new neighbors have no electricity, he runs an extension cord from his house without so much as a word. Neighbor kids pick on Cody, but their looney grandmother forces them to apologize. It could all be dismissed as Leave it to Beaver type idealism if the faults of the characters weren’t also there.

As Driveways progresses it peels back layers slowly, and sometimes simply through a throwaway comment. Del’s relationship with his daughter is hinted at throughout, but it isn’t until the very end that we understand why it’s strained and what Del’s part in that was. He’s a decent person but flawed. His daughter, first viewed as almost antagonistic, has new light shined upon her. It’s all that slice-of-life-style storytelling that may bore some to tears but feels like the best short stories you’ve read.

Special mention must be made of Dennehy, here in his final role. There’s such effortlessness to Del as a character that you’re reminded of what made Dennehy’s career so remarkable. You lose track of him as an actor and are left with a real person instead of a character. A lesser actor might have pushed harder here, but Dennehy’s experience tells him to pull back. So, when the film finally does reach its emotional climax, the entire thing feels so organic that inattentive audiences might simply miss it.

Driveways is a special film. It’s one of my favorite things I’ve seen all year. Perhaps we all need a lesson in decency right now and accepting one another for our flaws. At a time when so many of us have been in lockdown at home, perhaps we need the reminder to occasionally look across the driveway to our neighbors.