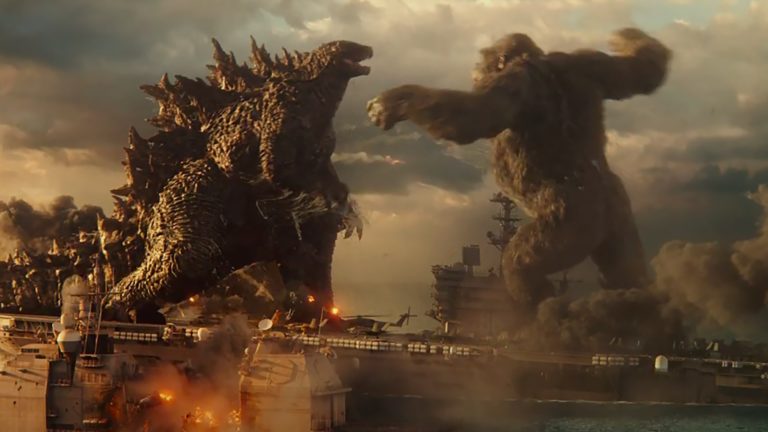 Growing up I loved Godzilla. I loved all the movies from the slightly serious to the absolutely goofy. I loved all his foes, and I even loved his son. There was a wink to the audience in those films. They knew they weren’t making high art, but they were enjoying what they were doing. American filmmakers have not had the same level of success. Starting with 1998’s Godzilla, the American Godzillas have never seemed to get their tone right—oscillating between stupid but no fun to self-serious. Well, I’m happy to say they finally got one mostly right.

Godzilla vs. Kong is the best American Godzilla film ever made. That’s not exactly high praise, but I suppose monster fans will take what they can get. As the title implies, it pairs the two titans against one another, but don’t go in expecting a two-hour brawl. The titular beasts don’t even meet until 40 minutes into the film and the fight you really want doesn’t come until over an hour and fifteen minutes in. Still, when it does arrive it’s 45 minutes of monster mayhem in a neon-lit Hong Kong that is truly a sight to see.

That wait wouldn’t feel so bad if the humans who took up the rest of the running time were more enjoyable. Kyle Chandler returns in what is mostly a glorified cameo with Millie Bobby Brown taking up more screen time. Brown can be wonderful in Stranger Things and Enola Holmes, but here her character is forgettable. Far more interesting is the conspiracy theorist played by Brian Tyree Henry that she’s attempting to track down. He seems to be the only one leaning into the silliness of this material. A movie like this needs either the deeper character arcs of Jurassic Park or the goofy ensemble of Congo with Ernie Hudson and Tim Curry. Anything in the middle is just a bore.

I suppose the true success of this film will hinge on whether people want to see another one after this. I think the modern problem monster flicks face is where do you go from here? Once you’ve seen two giant beasts battle it out and annihilate a city—what is left? It’s not like we can’t see natural disasters and Superman level cities in other films. Part of the charm of the original Japanese Godzilla films was no one was making anything else quite like them. Their thills and charms were unique. Now? Not so much.

I won’t reveal the ending, but it does set up a potentially intriguing new avenue for these films to pursue. I think that’s probably the sort of shift the series needs at least for a bit. Still, what’s here is fun, mindless escapism. It’s definitely a significant return for movies in theaters and a welcome return to form for the king of all monsters.