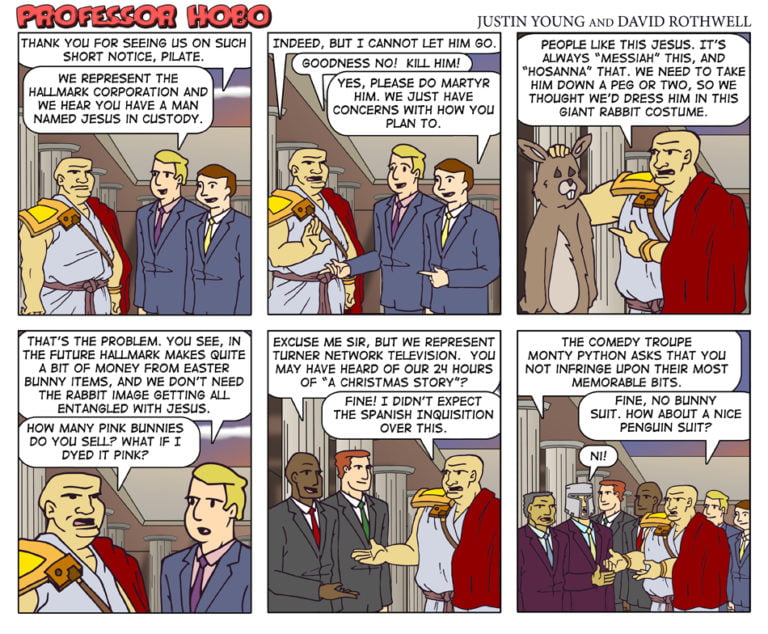 I liked the idea of what a modern crucifixion might have entailed.  There would have been teams of lawyers fighting for years over it.  That’s basically the whole concept behind this strip.

Also, the rule of three.  We have to build to the third set of lawyers.

↓ Transcript
MAN 1: Thank you for seeing us on such short notice, Pilate.
MAN 2: We represent the Hallmark corporation and we hear you have a man named Jesus in custody.

PILATE: Indeed, but I cannot let him go.
MAN 1: Goodness no! Kill him!
MAN 2: Yes, please do martyr him. We just have concerns with how you plan to.

PILATE: People like this Jesus. It's always Messiah this, and Hosanna that. We need to take him down a peg or two, so we thought we'd dress him in this giant rabbit costume.

MAN 1: That's the problem. You see, in the future Hallmark makes quite a bit of money from Easter Bunny items, and we don't need the rabbit image getting all entangled with Jesus.
PILATE: How many pink bunnies do you sell? What if I dyed it pink?

MAN 3: Excuse me sir, but we represent Turner Network Television. You may have heard of our 24 hours of A Christmas Story?
PILATE: Fine! I didn't expect the Spanish Inquisition over this.

MAN 5: The comedy troupe Monty Python asks that you not infringe upon their most memorable bits.
PILATE: Fine, no bunny suit. How about a nice penguin suit?
MAN 6: Ni!