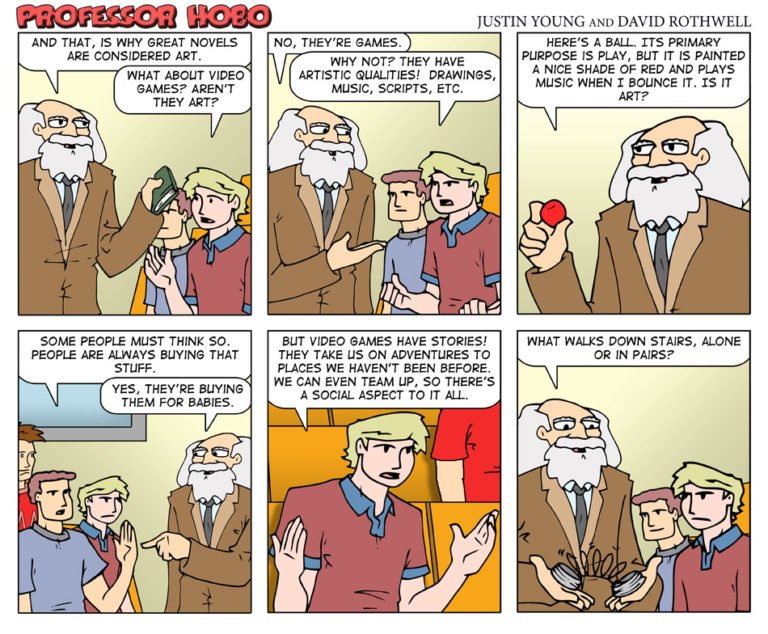 Whether or not video games are art is actually a fairly silly discussion. Roger Ebert is probably the most famous name to weigh in on the discussion, but long term it seems inevitable that games will be considered artistic at some level. What’s humorous to me, as a lifelong gamer, is the argument that the average shooter is high art. That’s sort of like arguing Twilight as high art literature. Just because some games may be art doesn’t mean they all are.

Is it odd that Professor Hobo carries around a ball and slinky? Yes, probably so. Though I did have a professor once who carried a ball to class each day. I think mostly to throw at sleeping students.

↓ Transcript
HOBO: And that, is why great novels are considered art.
TREY: What about video games? Aren't they art?

HOBO: No, they're games.
TREY: Why not? They have artistic qualities! Drawings, music, scripts, etc.

HOBO: Here's a ball. Its primary purpose is play, but it is painted a nice shade of red and plays music when I bounce it. Is it art?

BILLY: Some people must think so. People are always buying that stuff.
HOBO: Yes, they're buying them for babies.

TREY: But video games have stories! They take us on adventures to places we haven't been before. We can even team up, so there's a social aspect to it all.

HOBO: What walks down stairs, alone or in pairs?