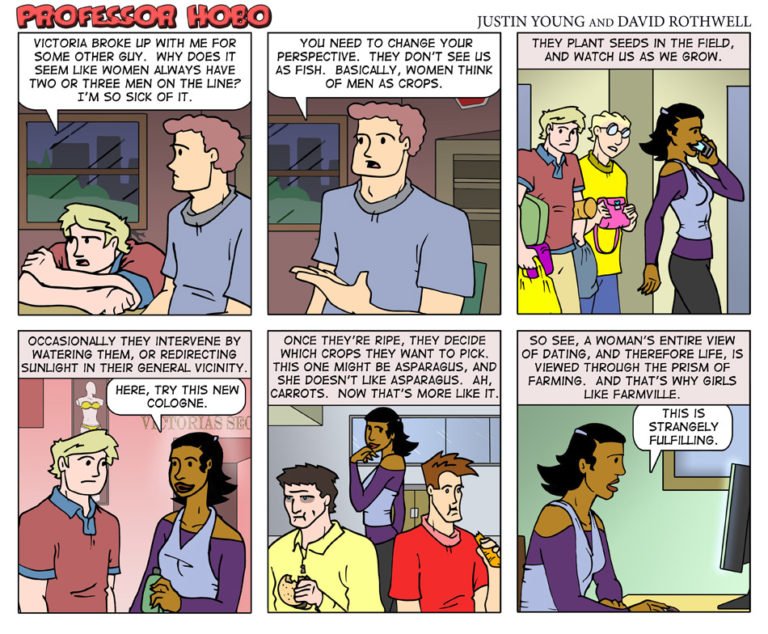 I think the sexes often view one another through strange prisms. I hear men refer to women in terms of a game or sport, and women refer to men with shopping terms. Of course, when the man no longer coordinates well like a good purse, they want to return him. And you know how mad men get when they feel like a video game is cheating? Wait, on second thought, that would make a good future strip.

↓ Transcript
TREY: Victoria broke up with me for some other guy. Why does it seem like women always have two or three men on the line? I'm so sick of it.

BILLY: You need to change your perspective. They don't see us as fish, Basically, women think of men as crops.

BILLY: They plant seeds in the field, and watch us as we grow.

BILLY: Occasionally they intervene by watering them, or redirecting sunlight in their general vicinity.
VICTORIA: Here, try this new cologne.

BILLY: Once they're ripe, they decide which crops they want to pick. This one might be asparagus, and she doesn't like asparagus. Ah, carrots. Now that's more like it.

BILLY: So see, a woman's entire view of dating, and therefore life, is viewed through the prism of farming. And that's why girls like Farmville.
VICTORIA: This is strangely fulfilling.

Victoria reveals her secret in HD