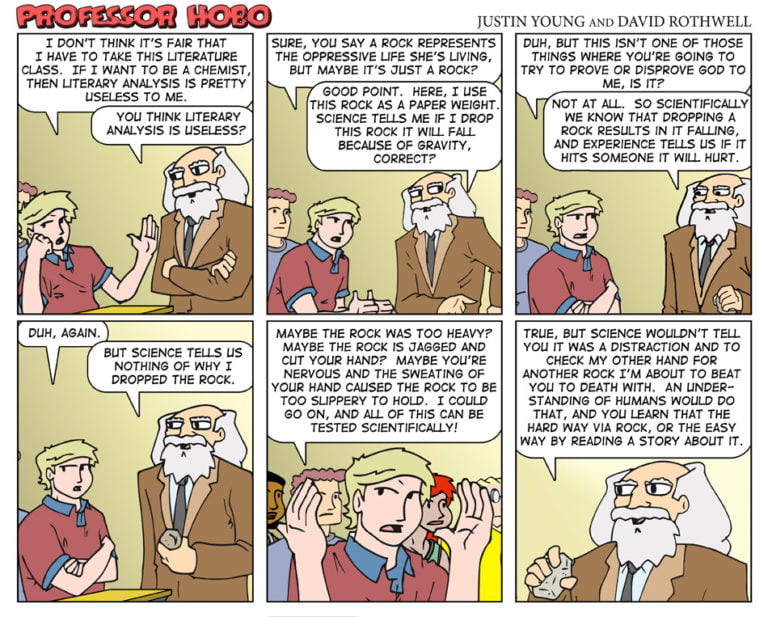 Students ask me on a fairly regular basis what is the point in analysis. It doesn’t directly do anything for you in the way that math and chemistry do, and there’s some truth to that. However, a nimble mind understands that some investments are long term in the way they pay off. It’s the true value of a real liberal arts education–you learn about all fields.

TREY: Sure, you say a rock represents the oppressive life she's living, but maybe it's just a rock?
HOBO: Good point. Here, I use this rock as a paper weight. Science tells me if I drop this rock it will be because of gravity, correct?

TREY: Duh, but this isn't one of those things where you're going to try to prove or disprove God to me, is it?
HOBO: Not at all. So scientifically we know that dropping a rock results in it falling, and experience tells us if it hits someone it will hurt.

TREY: Duh, again.
HOBO: But science tells us nothing of why I dropped the rock.

TREY: Maybe the rock was too heavy? Maybe the rock is jagged and cut your hand? Maybe you're nervous and the sweating of your hand caused the rock to be too slippery to hold. I could go on, and all of this can be tested scientifically!

HOBO: True, but science wouldn't tell you it was a distraction and to check my other hand for another rock I'm about to beat you to death with. An understanding of humans would do that, and you learn that the hard way via rock, or the easy way by reading a story about it.