The War On Christmas: Part I 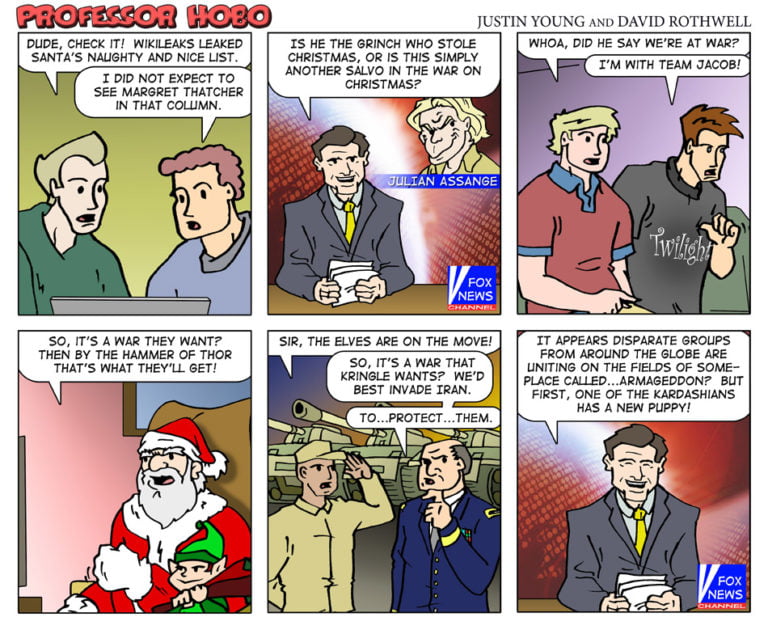 This is the first of a three part storyline we’ll be running for the week of Christmas. I guess the genesis of the idea was Wikileaks, and thinking what could they do that would really outrage people. I think ruining Christmas would just about do it. From there, everything else was just a slight heightening of reality.

And since a few people commented on our friend the elf with a war club, we brought him back.

↓ Transcript
JIMMY: Dude, check it! Wikileaks leaked Santa's naughty and nice list.
BILLY: I did not expect to see Margret Thatcher in that column.

ANCHOR: Is he the Grinch who stole Christmas, or is this simply another salvo in the war on Christmas?

SANTA: So, it's a war they want? By the hammer of Thor that's what they'll get!

PRIVATE: Sir, the elves are on the move!
GENERAL: So, it's a war that Kringle wants? We'd best invade Iran. To...protect...them.

ANCHOR: It appears disparate groups from around the globe are uniting on the fields of someplace called...Armageddon? But first, one of the Kardashians has a new puppy!