The War On Christmas: Part II 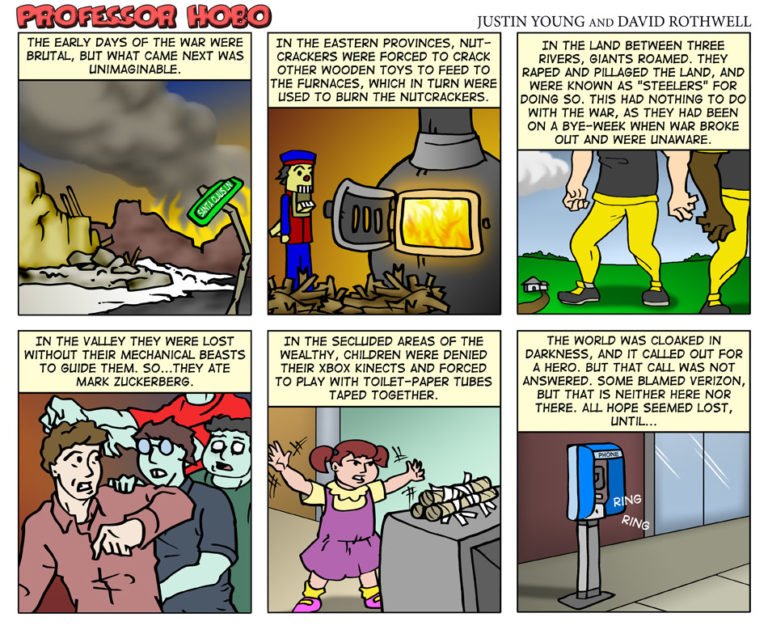 As part two of our Christmas trilogy, this had to be the darkest part of our story. All hope is lost in the second part–even for wooden toys. It’s a bleak Christmas tale, but that’s how it needs to be. Hopefully you’ll think the destination was worth the journey.

↓ Transcript
VOICEOVER: The early days of the war were brutal, but what came next was unimaginable.

VOICEOVER: In the eastern provinces, nutcrackers were forced to crack other wooden toys to feed to the furnaces, which in turn were used to burn the nutcrackers.

VOICEOVER: In the land between three rivers giants roamed. They raped and pillaged the land, and were known as "Steelers" for doing so. This had nothing to do with the war, as they had been on a bye week when war broke out and were unaware.

VOICEOVER: In the valley they were lost without their mechanical beasts to guide them. So...they ate Mark Zuckerberg.

VOICEOVER: In the secluded areas of the wealthy, children were denied their Xbox Kinects and forced to play with toilet-paper tubes taped together.

VOICEOVER: The world was cloaked in darkness, and it called out for a hero. But that call was not answered. Some blamed Verizon, but that is neither here nor there. All hope seemed lost, until...

A man’s Christmas journey through a woman’s world