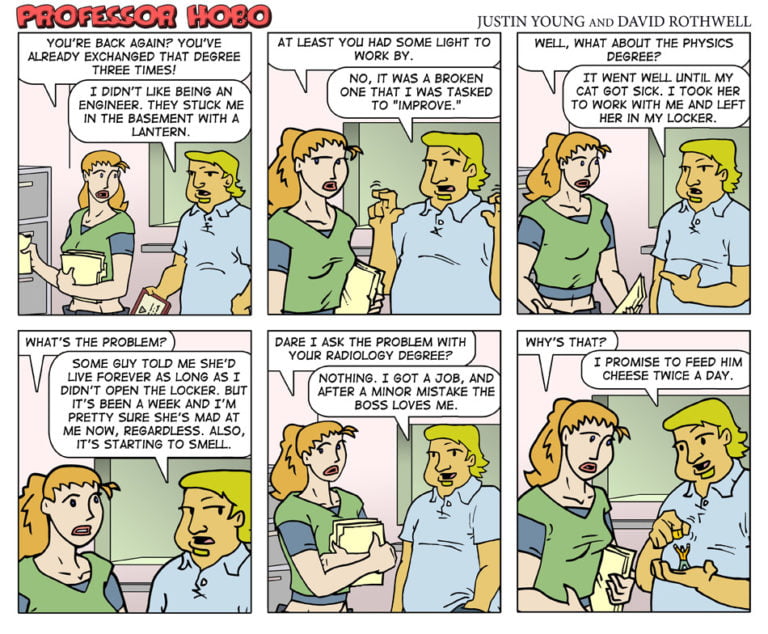 This whole storyline grew out of a discussion that it would be humorous if someone tried to return their diploma for a refund or exchange. There’s been stories in the media recently about people graduating with $100,000 or more in debt simply for a bachelor’s degree, and one assumes many of those would happily return their degree for a cheaper one. Cost has always been a factor in where most chose to attend college (if at all), but now it appears it may become the pivotal factor for most.

↓ Transcript
MEGAN: You're back again? You've already exchanged that degree three times!
DUDE: I didn't like being an engineer. They stuck me in the basement with a lantern.

MEGAN: At least you had some light to work by.
DUDE: No, it was a broken one that I was tasked to "improve."

MEGAN: Well, what about the physics degree?
DUDE: It went well until my cat got sick. I took her to work with me and left her in my locker.

MEGAN: What's the problem?
DUDE: Some guy told me she'd live forever as long as I didn't open the locker. But it's been a week and I'm pretty sure she's mad at me now, regardless. Also, it's starting to smell.

MEGAN: Dare I ask the problem with your radiology degree?
DUDE: Nothing. I got a job, and after a minor mistake the boss loves me.

MEGAN: Why's that?
DUDE: I promise to feed him cheese twice a day.